Building a complex web platform can be a real challenge, especially when parts of it are delivered by independent teams. Picking out the correct architecture is crucial, but maintaining it can be even more challenging. Frontend microservices, aka microfrontends, is an architecture that gives a lot of flexibility, but can cause performance issues in the future, if not managed well. This article presents an approach to the microfrontends architecture to keep the frontend technology stack efficient based on the complexity of user interface.

It’s 2022. In the frontend world, we have at least four major frameworks and libraries that have been around for a while and provide great resources to build fast and responsive user interfaces. The idea of delivering frontend components in vanilla JS seems to be pointless. Why should I even think about getting rid of the great features provided by well known, precisely documented and strongly supported mature libraries? Well, as always, it pretty much depends on the architecture. You have a single big frontend application running in React? Great! You have a couple applications with a bunch of shared components inside an Angular monorepo? Good for you! But what if you have a big platform with huge traffic, where frontend features are being delivered as independent fragments by independent teams across the whole company? Well, let’s talk about the last option and go through some reasonable use cases for vanilla JS/TS as Allegro platform is built upon frontend microservices.

Dealing with the frontend microservices architecture

The idea of splitting up the frontend of a big e-commerce platform into smaller pieces has been described in the article Managing Frontend in the Microservices Architecture. It’s been 6 years since the article appeared and even more since the architecture was implemented at Allegro. Nowadays, we manage over 1000 microservices and 600+ Opbox components that power the Allegro platform. We can say that it works pretty well for us. As software engineers, we don’t need to worry about things like routing, SSR or monitoring, because they’re already served by Opbox. Also, we have overcome the problems the architecture causes and implemented efficient solutions. One problem has been described in the article CSS Architecture and Performance in Micro Frontends.

To clear things up a little bit, imagine building a page made of tens of components, delivered by independent teams. Every component, even the simplest one was implemented using one of the popular libraries. Seems harmless, but it can truly hurt web performance. Rendering plain HTML on the server is much faster than evaluation of library mechanisms to produce static markup. Moreover, client bundles need to be fetched in a browser, but they are pretty heavy as they include not only the custom code, but the libraries’ code as well… It’s going to take even more time when the internet connection is weak (try setting up throttling in the dev tools). Well, undeniably working with distributed components requires a lot of discipline. Also, monitoring and measuring is pretty important to figure out if the components the team takes care of perform well. If you want to learn more, take a look at the article Measuring Web Performance.

How much discipline do you need to keep the system fast and efficient? Enough to have a reasonable approach to pick out the correct technology to solve the problem. You know you’re asking for trouble, when you decide to use a complex rendering library for rendering static labels that don’t behave in a reactive way. What could you do instead? Just map data to plain HTML! This is the case for vanilla JS. In the next paragraph, I’ll present and discuss the approach we use on our team.

For organizational purposes, we decided to define three types of complexity of UI components and assigned three technology stacks that are suitable to solve different kinds of problems. Let’s dive into the details.

This one doesn’t do anything spectacular. In most cases, it’s entirely rendered on the server and has no client side scripting, or it may have some simple event handling. You can easily navigate through the platform using just an HTML anchor, can’t you? Also, CSS is so powerful nowadays that javascript is not always necessary to implement dynamic behaviors in browsers. The approach for such a component is simple: take the response of the backend service, write some HTML and CSS representing this data and send it to the client.

UI Component that is reactive

In this case, the component is rendered server-side, but the client side scripts run in a browser to provide reactivity. Partial changes of the state require updating the existing parts of the DOM. The challenge here is to implement a fine-grained reactivity mechanism, organize the code in a functional manner and separate side effects. The first thing can be easily handled using reactive streams like xstream, which is lighter than the well known rxjs, but still powerful. To keep code organized in a functional manner we borrowed the Model-View-Intent pattern from cycle.js and adjusted it to our case, where the HTML is provided by the server and “hydrated” on the client side. The idea is simple: we mount event handlers in Intent, map it to state in Model and react to changes in View. At the end of the system there are side effects that run as a result of reactive subscriptions inside View. It’s still vanilla JS/TS on the server side and vanilla JS/TS with a touch of reactivity on the client side.

This one can be rendered on the server side, but then always hydrates on the client side. It can also be entirely rendered on the client side, forming a single-page application. It’s strongly reactive, changes its state constantly and re-renders. Also, state changes affect many parts of the DOM. You surely know it is a great use case for libraries like React, where state changes trigger a reconciliation algorithm, which figures out what has changed and operates on an effective layer called Virtual DOM. I don’t think this approach requires any more explanation, as it’s the most popular approach in the frontend world nowadays. We just write one piece of code, run renderToString() on the server and hydrate() on the client, that’s it.

The presented approach may sound artificially complicated, but it does do its job. Using a sledgehammer to crack a nut causes web performance issues that can go even further in a distributed environment. Spending a little bit more time on planning features to pick an effective technology definitely pays off! Here are some conclusions based on our experience we would like to share: 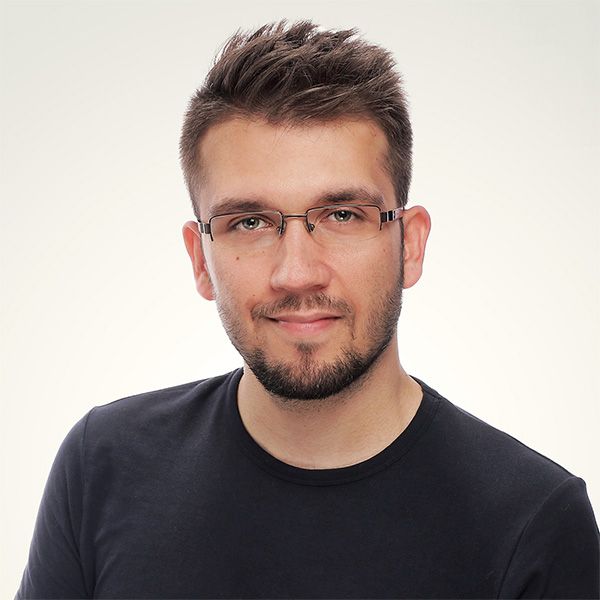 Frontend software engineer who does not run away from backend. Mostly interested in software architecture and biological modeling. Always ready to learn good patterns. Tech speaker, mentor and home barista.