This is a story about a Team working in Scrum that wanted to turn to Kanban and ended up, deliberately, working in something resembling Scrum-ban. Scrum-ban basics can be found in Wikipedia. We did not follow all of them.

The story started when a project with a fixed deadline lasting a few months was given to the Team. After a few months of working in Scrum and having more and more technical user stories to complete, Product Owner suggested that we switch to Kanban as we were not able to deliver working software in the subsequent iterations and that we concentrate on delivering more stuff — compared to the previous setup.

And so we did. We started with getting to know what Kanban meant to each of us so we could establish a mutual understanding. Some of the thoughts were: higher flexibility in terms of our approach to work, Work In Progress (WIP) limitations on Kanban board, delivering value faster for the Client, focusing on tasks rather than time-boxes or scope and, last but not least, Kanban being a perfect complement to Scrum. WIPs are limiting the maximum user stories that can be in a particular state like “In testing”, “In Review” and so on.

Secondly, we discussed why we wanted to move to Kanban. Team’s answers were: we don’t have to think how much we have to burn, increasing our velocity (hypothesis), reducing overhead, less time spent for a task in a particular state (thanks to “work in progress” limits), increased flexibility. Having said that, the penultimate step was to create rules based on which we were going to operate.

We did not want to give up some of the events that were present in Scrum hence our rules of engagement were:

Many of the above points were already happening when using Scrum. What changed for us was setting up WIP limits, the way of contacting stakeholders right after completing a particular task and asking for verification. As you can see we abandoned Planning and Review. Stakeholders were to be contacted after completion of each task and PO was to prioritise backlog elements so that we could take those that are highest in the backlog. The Team has amended its DoD (Definition of Done) with the requirement that each story should be accepted by one of our stakeholders. All of the above has led us to Scrum-ban kind of approach.

The last step was establishing the acceptance criteria for this experiment:

These rules were in conjunction with one another meaning that all must happen together for us to consider this experiment a success. Additionally, we agreed on checkpoints, being part of retrospective, happening at the end of each week so we could quickly verify if something had gone bad. The experiment was to last two weeks — same length as our previous Scrum sprints.

We established that we were going to verify how we are doing after a week and to decide according to our criteria if we were to continue after two weeks time. After inspecting our process for the first time (after a week), not much had happened. The Team has taken two larger tasks and was working on them since the beginning. It was hard to assess the velocity as not much had happened yet. We agreed to continue.

In two weeks, the moment we’d all been waiting for (sort of) happened. We were to answer the question “Where are we going with this?” thus we started checking:

Our third conclusion was lack of commitment when the work is going to be done. This was one of the differences between true Scrum-ban and our approach. Where possible we agreed that we should commit to when we estimate the task is going to be complete. We wanted to avoid too loose working atmosphere and to turn up the velocity a bit. Additionally, we placed emphasis on informing each other about wrong estimates or delays (doh!) when working on them.

Second two weeks — so now what?

We met on our retrospective meeting, after a month-long experiment, summing up the work and for inspect & adapt. 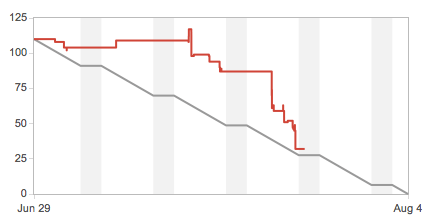 The above burn-down chart symbolises Team’s performance from the beginning of the experiment. First two weeks were not great. There was a lot of context switching, people going on holidays and one large story (13sp) that we were doing for almost the whole time. We burned 18 story points (sp) in total for that period. Last two weeks were much better, we managed to complete what we’d started and completed a few other, smaller tasks ending with tasks completed that accounted for 54 sp.

As for our problems that we indicated during second checkpoint there were no delays or wrong estimates and we did not commit for each story undertaken on the sprint. Product Owner was fine with that as he asked questions during daily, if necessary, or when he saw that a particular task was crucial for stakeholders. We did start to work in Jira only abandoning our physical Scrum board for the time being. Pair programming for tasks longer than 1 day did not happen as well — too many team members were on holidays so it did not make sense. We are keeping this technique for future reference to use it when it becomes easier to make some conclusions.

Up till our final day of experiment we burned 72 story points — most of them in the second, two-week iteration. This gives an average of 18 storypoints (sp) per week or 36 sp per two weeks. Below you can see our previous Scrum-only sprints. 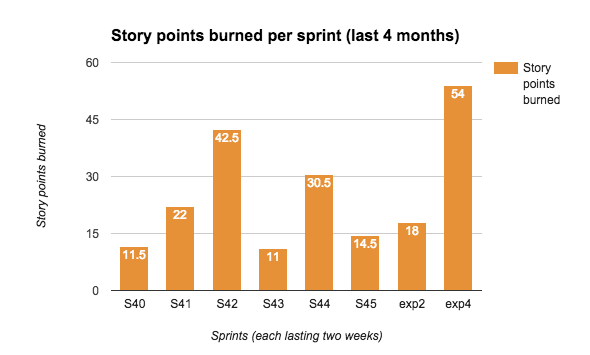 As can be seen above, stories were burned quite irregularly. Average from last three sprints was 18.67 sp and 22 from last six sprints that happened over 3 months prior to the experiment.

Taking this into consideration, as well as our happiness and feedback from our stakeholders we decided to continue on daily basis up till our formal deadline.

We agreed that the experiment with our mix of Scrum and Kanban was successful. We inspected & adapted along the way and learned new stuff. There were also things we should do but didn’t and some elements we need to pay attention to in the future. We are also continuing to work this way till the end of the project.

One of the things we should do but didn’t was to inform stakeholders earlier and ask if they are ready for such a change. Here the switchover was simple and enhanced their experience. Nevertheless, there might be something we missed thus the importance of an earlier dialogue. Also a regular “checkpoint newsletter”, right from the start, would be convenient for them to catch-up with our work and see the results within the timebox. Our Product Owner is going to undertake this from now on. Additionally, we plan to hold a review for our stakeholders to recap the work from last month and make further decisions about product clear.

Another risk, not directly connected with Scrum-ban, was larger stories (for us 13 sp and above). They were often completed within one sprint (2 weeks) and in Scrum-ban it could take even longer as there was no fixed review date. We decided to split them to smaller pieces of 8 sp or less. As we don’t want to give up on stories carrying business value for our end user we are going to search for an optimal solution during next refinement when a 13 sp story will be groomed and come up with several variants on how to complete it.

A thing or two to reflect upon in the long run are: how the work fits in a larger picture of what we’re doing? How about the architecture? Do we know where are we heading? How do we want to work with our backlog if there is no planning event? How can the team contribute to the work and plans being made? What about our own ideas?

These questions are what we will need to work with when the project comes to an end. Answers to them are found in Scrum but not necessarily in our version of Scrum-ban.

We hope the conclusions from our experiment can be helpful for others, too. It would be great if you can share your thoughts or any other experiments of your own with Scrum-ban.

Marcin is an Agile Coach at Allegro Group, passionate about agile, coaching and travelling. He helps teams to be more agile by coaching and learning with them, removing impediments and cooperating with the organisation to foster change and improve working environment. He has experience working with mature and ‘new to agile’ teams. Formerly acting as a Project Manager and coordinating globally dispersed (USA, Europe, India, China) as well as local project teams in financial / IT environment. Personally an avid photographer travelling to distant and less distant places to capture moments that stole his attention — sharing his stories at marcinkonkel.com. Additionally, he’s writing and sharing his professional experience at medium.com/@m_konkel.