Have you ever worked on a project where after downloading the code from the repository you start to wonder what business requirements are hidden under the layer of unreadable tests?
Or maybe you are currently wondering how to test a new feature that you have been entrusted to implement?

Nothing is more frustrating than code that we cannot control, and over time it becomes so troublesome that no one bothers about it too much. People do not pay enough attention to such a project and subsequent tests, if any, duplicate the shortcomings of all the previous ones in the legacy.

In this article I will show you how to disenchant this miserable state of affairs with a few simple tips. I invite you to approach the tests in a completely different way to create their new version.

The domain that will serve us as a background will not be too complicated, but at the same time not simple enough to actually be able to capture the benefit for which it is worth investing more time and effort in writing tests that are clear and easy to develop further.

For the purpose of presenting to you a domain that is neither too complicated nor too trivial, I will use a model of a vinyl records online shop (I tried to create a domain which is universal and intuitive at the same time).

Let’s assume that we have the following very preliminary and explicitly written general business assumptions.

Such assumptions can be translated into one of the BDD-style scenarios:

The structure of the code reflects the architecture that was adopted during the implementation works. The application is a modular monolith written based on the architectural style of Ports & Adapter, as well as the Domain Driven Design approach. 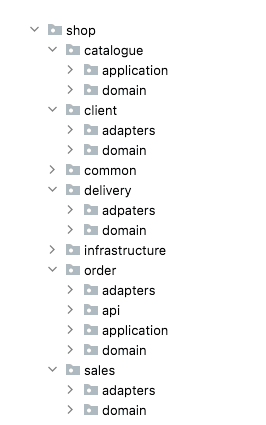 We can distinguish the following packages:

As the order-related domain is the most complex, it actually coordinates the entire purchasing process, and thus it should provide a comprehensive example for our further consideration.

How can we test such code?

Each design must feature certain guidelines, which is also the case in choosing the testing methodology. In IT literature, we can probably find many interesting references to how we should test an application code, nevertheless, in this article I am going to show you how, on a daily basis, me and other teams at Allegro approach this issue in our work.

Below I have listed the main assumptions that will guide us throughout the rest of the article:

Naive approach — or how not to write tests

As I mentioned earlier, tests should be a living documentation of business requirements. It is typical of each documentation that you have to read and understand it first. It’s easy to guess that this shouldn’t be too much of a problem for a potentially new person on the team.

Let’s take a closer look at Scenario 1.1, at the very beginning of our article, implemented in the form of an acceptance test. This is of course sample code that could be created in projects where no special attention is paid to the quality of the provided test code. I would not recommend this type of testing.

The above code is not easy to analyze as it requires the reader to focus on too many technical and implementation details, such as:

Undoubtedly, it is far from the appearance of the original Scenario 1.1. It contains many concepts that do not belong to the domain language that obscure the presence of natural expressions that we use in conversations with business stakeholders, for instance “event publisher” or “mock server”.

Another disadvantage of this code is that it is not easily adaptable to further development, e.g. in the event of a change in business requirements when it is necessary to modify or add another test.

The conscious reader might notice that the example of our imperfect test is maybe too exaggerated and that each section of the ‘given’/‘when’/’then’ blocks, etc. could be extracted by the use of a separate private method. Certainly, this procedure may result in some improvement of the code quality, but nevertheless such an approach still has many drawbacks:

Let’s take a closer look at a unit test this time. It covers a narrower range of requirements because, e.g., it does not check whether the client has been sent a free music track. Try to find similar defects in it as in the acceptance test.

In this case, it may seem that test is much better, because it is simpler and easier to read, but with a more in-depth analysis it turns out that it still does not meet the expected requirements from the “How can we test such code?” section, because:

I have used the two examples of tests above to quickly highlight how many flaws the naive solution has adopted, even though the business requirement was not too complicated. In summary, in each of the tests we have had to take extra care of:

In the next section, I will focus on eliminating these shortcomings with a few simple solutions.

Fixing the state of affairs

Let’s look at the first test again, which was presented in the previous section “Naive Approach”. It is not too hard to notice that the vocabulary here resembles a more natural language, used by domain experts who do not use purely technical terms.

In the following part of this section, I will show you how in a few steps you can use simple concepts to arrive at this model.

Test Data Builder provides ready-made objects with sample data. It significantly improves the readability of the code by replacing setter methods or invoking constructors with many parameters.

In the above example, the toMap method returns a map, which can then be turned into a body of the HTTP request in JSON format.

The Test Data Builder can be used both for constructing input data at the controller level and at the level of unit tests, e.g. by creating an object representing the initial state of the database. There is nothing to prevent us from using this pattern, also for the construction of objects on which we make assertions.

What is worth mentioning, we use the same constants in many places, which may seem a controversial idea for many readers. However, I decided to split them into a separate TestData class and based on the assumption that the class builders are assigned default values. Thanks to this I can focus on data relevant to a given test case only. It does not make sense to introduce unnecessary noise into the test, as it should be set up with a minimal required data set.

This pattern is also described by Nat Pryce on his blog, where you can find a more detailed explanation.

The OrderPaymentAcceptanceSpec class implements several traits with similar names ending with the word Ability. This is another concept that I want to discuss. As we understand it, and so it is giving certain abilities to the test scenario. As a result, with this approach, we can expand small blocks more and more.

Now, it is easy to imagine another test that needs the same ability or skill, by which we can get rid of duplicate code between different classes of tests.

Let’s analyse an example implementation of a trait named: CreateOrderAbility

It extends the MakeRequestAbility trait responsible for building and sending an HTTP request to a given URL, which is already served by the Spring controller, hiding all technical aspects from the reader. Moreover, the methods it exposes in conjunction with the passed parameters invoking the static method of the test builder class, read almost like prose. This simple procedure makes our code more expressive, making it look closer to the text from the requirements Scenario 1.1.

In the case of a unit test, such an ability may wrap the in-memory implementation of the repository.

And this time we read the beginning of the test identically:

In some cases, the Ability pattern can act as an assertion class, which I will mention later in the part regarding tailor-made assertions. Often in the case of black box tests, there is a need to check additional side effects, e.g. whether an email was sent after the purchase of the order, or whether a service was asked with the data we want. We can then split this logic into an appropriately named Ability class method.

The question is why we should make so much effort in creating our own solutions, and not use ready-made ones directly from the framework? Here are the arguments for:

The last concept that I want to discuss is dedicated assertion classes. An assertion class is nothing more than a simple class exposing methods which allow checking the input object appropriately.

In some scenarios, we would actually like to verify the data that, for example, was eventually saved in the database. Some of our objects can be so complex that it would be inconvenient to check them directly in the test, referencing the nested objects or iterating the collections.

Apart from this, such an assertion can also be used in other places than just one test class.

I hope that by presenting the above example I have managed to show you how to use simple concepts to write or improve tests to be more readable. Consequently, they become a living documentation of our code, which undoubtedly is a great added value to the project that we work on.

However, if you are wondering whether it is always worth investing time in writing tests as suggested in this article, my answer is “No”.

I hold an opinion that not every project, or even part of it, e.g. a given module, requires this approach. In the case of simple applications with the complexity of the CRUD type, there is no need for sophisticated solutions. It is often enough to test such an application end to end, using the simplest solutions offered by a given framework.

I am a Software engineer and for over 8 years I have been interested in and follow topics related to Domain Driven Design, Event Storming and software design. Another area that interests me is the Java Virtual Machine and more and more often bare-metal programming.