When you go through articles related to Hexagonal Architecture (HA) you usually search for practical examples. HA isn’t simple, that’s why most trivial examples make readers even more confused, though it is not as complex as many theoretical elucidations present it. In most posts you have to scroll through exact citations or rephrased definitions of concepts such as Ports and Adapters or their conceptual diagrams. They have already been well defined and described by popular authors i.e. Alistair Cockburn or Martin Fowler. I assume you already have a general understanding of Domain Driven Design and that you understand terms such as Ports and Adapters. I’m not a HA expert, yet I use it everyday and I find it useful. The only reason I write this post is to show you that Hexagonal Architecture makes sense, at least if your service is a little more than a JsonToDatabaseMapper.

I’d like to provide a quite simple example project, not too trivial but complex enough, based on a very straightforward domain. The domain includes only two classes:

There are also several value objects for fields such as id, title or content.

Later we will go into detail about the overall service architecture, where other components are built around the domain. Before we do so, I’d like to give you a heads up by presenting it on a diagram, which shows how the actual elements of the underlying project are organized. 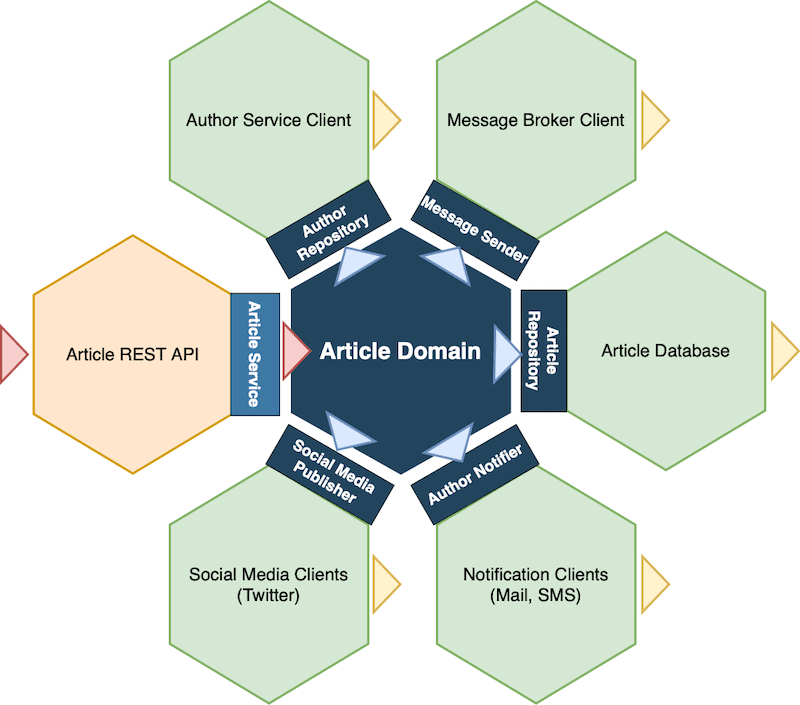 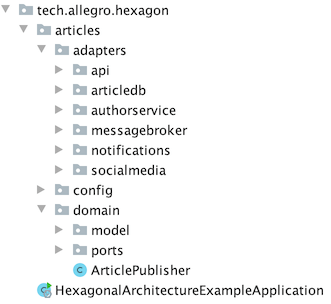 In the introduction I’ve mentioned that I assume you already know the basic concepts behind Hexagonal Architecture. Now, that you have seen a high-level picture of the idea, I think that everyone could do with a short recap before we go on.

The REST API adapter: the front door of your service

The example microservice, which will help us depict Hexagonal Architecture, exposes a very simple REST API. As an author, you can create an article and then retrieve its content by issuing POST and GET HTTP requests, respectively.

The REST adapter implementation accesses the domain logic via an internal ArticleApiService. The API service belongs to the API adapter. ArticleApiService delegates article creation and retrieval to the domain ArticleService and translates the domain model to the API model. Calling domain services directly from the controller may lead to the fat controller antipattern, due to the fact that orchestration logic and domain model translation should not be the responsibility of the controller. An alternative would be to introduce a public application service instead of the internal adapter service. An application service is a concept which belongs neither to the domain nor to the API adapter. It would take over the responsibility of model translation and orchestration, opening the possibility of including other adapters in this process.

I can’t stress it enough that, due to the hexagonal package structure, none of the adapter code needs to be public, as no other code is allowed to depend on it. It is impossible to import it to the domain or other parts of the application thanks to the package-scope access modifier.

Each adapter works on its data model, which can translate itself “from” or “to” the domain. The domain model on the other hand is adapter-model-agnostic. That’s why you should always favour

You may wonder why there is only one inbound adapter and several outbound adapters. I would like to make it crystal clear that it’s just because of the overall simplicity of the example application. In a real-life scenario you would also probably have other gateways to your service. It could be a subscription to a message topic or queue, a SOAP API or an API for file uploads. They could delegate their inputs to the same or other ArticleService methods. 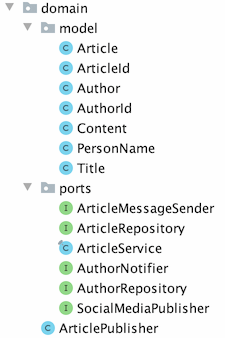 The ArticleService forms a port on its own. It is called an inbound port meaning it handles incoming traffic (in this example, in form of HTTP requests). Outbound adapters handle outgoing traffic (e.g. database requests or messages sent to a broker) and decouple core from implementation details (e.g. which database or message broker was used).

It is often assumed that each port needs to be an interface, though it doesn’t make much sense for inbound ports, such as ArticleService. Interfaces, in general, allow you to decouple implementation from the component that uses it, following the Dependency Inversion Principle. They are essential to decouple the domain ArticleService from ExternalServiceClientAuthorRepository hidden behind the AuthorRepository port. Hiding ArticleService behind an interface (especially a meaningless IArticleService) would most likely be seen as over-engineering and would give you nothing in return.

The core business logic is included in the domain Article::validateEligibilityForPublication method, which validates the article and throws an exception should any problems be identified. This part of domain logic does not require external dependencies, so there is no reason for it to reside in the enclosing ArticleService. Doing so is referred to as Anemic Model Antipattern. Other domain operations implemented in ArticleService, creating and retrieving an article, depend on external dependencies hidden behind port interfaces.

Domain logic responsible for sending data to external systems, as a result of article creation and retrieval, has been encapsulated in ArticlePublisher.

Ports used by the domain for outgoing traffic are implemented by corresponding adapters:

It makes the adapters pluggable and potentially replaceable. For example you could replace ExternalServiceClientAuthorRepository with a client to a facade-service aggregating multiple user data sources e.g. LDAP, an ERP system, a legacy DB.

You might say: ”Hey, when was the last time you replaced a database with a different one”. Well, good point, it doesn’t happen everyday. Still, in a microservice-oriented architecture exchanging adapters of legacy services with new ones is very common. If you are still not convinced, I’m pretty sure you would at least benefit from avoiding spaghetti code, where ”everything depends on everything”. Even in a ”layered” architecture you wouldn’t like your View to explode upon serialization of a managed JPA entity, would you? The Open Session In View Anti-Pattern is still quite common. It makes my eyes bleed just as mixing JPA annotations with Jackson and JAXB. An independent domain model makes much more sense when you’ve refactored such projects before. 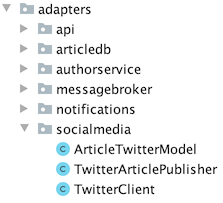 Below you’ll find an example of SocialMediaPublisher port implementation. TwitterArticlePublisher translates the domain article to ArticleTwitterModel and sends the result via the TwitterClient. The domain ArticlePublisher delegates social media publication to a list of SocialMediaPublisher port interfaces. It has no clue about the existence of any Twitter API integration code such as HTTP clients and JSON mapping.

By way of analogy, the domain Article knows nothing about translating itself to ArticleTwitterModel.

By adding appropriate log messages to the adapter code, you can analyze the flow of the article creation and retrieval requests:

We’ve gone through the whole example so I guess we would do with a quick summary. The domain constitutes the core of our application (centre of the hexagon). It is surrounded by six adapters. The endpoint in the REST API inbound adapter calls the domain logic via a public domain service. The five outbound adapters implement domain interfaces, integrating the article service with

As much as I did my best to design the example so that it would show the benefits of using Hexagonal Architecture in a self-explanatory and intuitive way, to avoid theoretical elucidations, I would still like to emphasise what we have gained. Due to designing the core of the application to be independent of external adapters we achieve e.g.:

I hope that the above example depicts the theoretical concepts such as Hexagonal Architecture, Ports and Adapters in an easy and comprehensible way. I tried to avoid oversimplifying the example implementation, especially for the sake of readers who encounter the Hexagonal Architecture approach and Domain Driven Design for the first time. It could have been difficult to grasp the difference between a traditional layered architecture and Hexagonal Architecture if the only thing your domain is responsible for is storing and fetching data from a repository. The same applies to understanding the reason why the domain model should be independent from the adapter model. There are many applications, in which the domain model consists of only one class mapped 1 to 1 to an adapter dto. Both classes have the same fields, they have just different names, e.g. Article and ArticleEntity. Those applications seem to present Hexagonal Architecture as an over-engineered approach, where one copies the same field values from class to class just for the sake of the pattern on its own. I believe the underlying example is better suited for explaining the Hexagonal Architecture pattern.

If you are interested in the implementation of the example service, fragments of which were included in the code snippets, take a look at the github repository

Karol is a software craftsman and data analysis enthusiast. His main interests lie in cloud distributed systems but he also sets his first steps in frontend development and data modelling.