This post is an introduction to the mysterious and alien world of aspect-oriented programming, or aspects for short. At first sight it is difficult to understand why to use aspects and how a project can benefit from this technology. The simplest use case where we can use an aspect is logging. I believe that everyone saw, or even wrote on their own, a piece of code where the business logic was interweaving with infrastructure code:

However simple this example may be, please remember that sometimes it is necessary to write more detailed information to logs and, as a result, the logging code becomes more complicated. We can see that the business code is affected by the logging code. The calculateOrder method should be responsible for only one thing, i.e. calculating orders. Unfortunately, it has to perform more operations and log information. What is worse, we may want to log the result of warehouse.getStatus and orderFactory.createOrder not only in the calculateOrder method but in other methods in our business code. Imagine that there is a request to change logging details. We would have to modify every line of code related to logging. Fortunately, there is another way to implement this.

Using aspects ensures that the logging logic (i.e. infrastructure code) remains in one place and can be reused everywhere in the project. Aspect-oriented programming allows software developers to separate the infrastructure code from the business code and, as a result, the business code is clearer and easier to maintain. Moreover, aspects may be used to modify third-party libraries. This feature can be very useful because we can employ an aspect to add, for example, a security feature instead of patching (or fixing) a library.

We can now revisit the calculateOrder method:

AspectJ encapsulates cross-cutting expressions in a special class called an aspect (since we use Spring here, all aspects are well-known Java classes). For example, an aspect can alter the behavior of the base code (the non-aspect part of a program) by applying advice (additional behavior) at various join points (points in a program) specified in a query called a pointcut (that detects whether a given join point matches). An aspect can also make binary-compatible structural changes to other classes, such as adding members or parents (this is not discussed here).

Let us assume that we have a business component in Spring which is responsible for transferring money from one account to another. According to the business model, a user is charged for some transfer operations, while other operations remain free of charge. This mechanism is implemented in the legacy system. We would like to log calculated fees in order to be sure that the legacy system works properly.

We can see that the MoneyTransfer class have just become cleaner. The fees verification logic is always executed and the client code is completely unaware of it. The execution(* com.company.LegacySystemWrapper.calculateFees(..)) expression is a pointcut which captures calculateFees invocations. It is also a join point which uses the pointcut. Moreover, the @Around annotation is AspectJ’s advice and the LegacySystemWrapperAspect class is an aspect.

Let us look at aspect configuration in a Spring project. The traditional way is to add proper entries in the XML configuration:

Next, we can create aspects in the same way as ordinary components:

And the class itself looks exactly like LegacySystemWrapperAspect which we have seen above. We can also configure aspects with Java annotations themselves. In order to do that we need a special Spring configuration:

Again, an aspect class looks the same as before. It is an ordinary Spring component with the @Aspect annotation. Every aspect created in this way is being managed by the Spring Container and experiences the bean lifecycle.

In order to understand how aspects work and how they can be utilized, let us look at a real-life use case. Imagine that there is a service deployed in the cloud that uses other services to do its job. As a result, its performance depends heavily on the performance of other services. Sometimes when it takes too much time for it to serve a request, it is hard to find the cause of the delays without gathering proper statistics. In order to make it easier to track performance issues, the service monitors calls to external services by collecting statistics:

The aroundCall method is used by aspects to gather call time statistics and to measure how often exceptions occur. The following example shows an aspect which gathers statistics related to MongoDB:

Despite the fact that this class is short, there are several things worth mentioning. To begin with, note that we have two pointcuts here. The first one captures calls to any method from the MongoRepository class, while the second one captures calls to any method from the MongoCommonPriceListRepositoryCustom class. Secondly, since this aspect is responsible for gathering performance statistics, we want it to be the first aspect being fired when any MongoRepository or MongoCommonPriceListRepositoryCustom method is invoked. That is why we use @Order(0). It is worth mentioning that you can have many aspects with their advice and pointcuts focused on the same class or method. This will create an onion-like structure with the targeted class in the center. In this structure every call of proceedingJoinPoint.proceed() from outer layer calls an aspect method from inner layer. 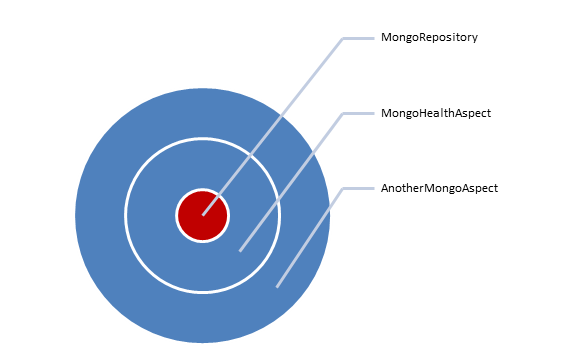 Aspects from the inside

When it comes to aspects, it is essential to understand the difference between calling a plain old Java object versus calling a proxy:

(images from the Spring documentation)

Aspects in Spring are implemented by default as Java standard J2SE dynamic proxies, which enable an interface or any set of interfaces to be proxied. However, when business objects do not implement any interface, Spring uses CGLIB instead. This results in Spring aspects limitations as you can only advice public methods. Have you ever wondered why the @Transactional annotation on a private method did not work? Now you know why — @Transactional support is implemented as a Spring aspect and, as a result, cannot advise private methods.

Testing an aspect may be a difficult task due to their nature as they require at least one Java class, method invocations of which will be captured. In order to make the testing environment as small as possible, a good solution is to separate the logic of advice from the aspect itself. We could see that in the code presented above there are two classes – HeathMetrics and MongoHealthAspect. This composition allows us to test our code properly. Unit tests of HealthMetrics only require ProceedingJoinPoint to be mocked. The logic of HealthMetrics can be tested easily, without the need of creating and setting up another component.

However, if we have not had such a nice solution and had merged HeathMetrics and MongoHealthAspect into one MongoHealthMetricsAspect class, testing it would require much more effort. First of all, we would have to set up Spring context because in Spring AOP aspects are, in fact, proxies. Secondly, we would need an object whose method calls will be intercepted. We could use Mockito to create a mock. However, this mock would have to be a Spring bean in order to be proxied. All this would mean that our unit tests have just became context tests. While writing unit tests for aspects, we may encounter some problems when using external libraries. For example, CatchException creates its own proxies which interfere with Spring proxies and, as a result, the object under test may behave unexpectedly.

In this tutorial we have only seen @Around advice. Here is the complete list of all types of advice from the Spring documentation:

When it comes to pointcuts and their designators, we have only seen execution designator. Here is the complete list of all pointcut designators from the Spring documentation:

In the code presented above we have seen pointcut expressions combined with logical and (&&) operator. However, in Spring AOP, you can use three operators:

Aspect-oriented programming is, in fact, a double-edged sword. Separating cross-cutting concerns ensures that your code is in line with the Single Responsibility Principle (SRP). This means that your logic is distributed among business components, aspects and objects supporting aspects. As a result, it is more difficult to understand and maintain the code. Moreover, refactoring of the business code, for example renaming methods, may affect pointcuts and, in fact, disable them as they will match business method calls no more. However some IDEs, such as IntelliJ IDEA Ultimate, have a quite nice support for working with aspects and can handle refactoring of aspects properly. Debugging is another drawback of using aspects in the project. Aspect methods interweave with normal business flow and, as a result, it is difficult to understand what is going on in the program.

This tutorial is an introduction to a much wider topic which is aspect-oriented programming. We have learned some of the basics here: what aspects are and how to use them in a Spring project. Every reader who wants to learn more is encouraged to follow the links from the Further reading section.

Piotr is a software engineer interested in both concurrent and functional programming. He is a big fan of high-quality code and clean architecure. At Allegro, he works in a team which develops solutions for the financial department.