Below you can read about a bunch of decisions concerning API architecture because of which new features in Allegro mobile apps were not delivered as fast as we expected and which caused problems with stability.

Many requests to build one view

In our backend we have a microservices architecture. Each service supports a narrow area of business logic. Let’s look at an example of how the introduction of microservices has affected our mobile development: 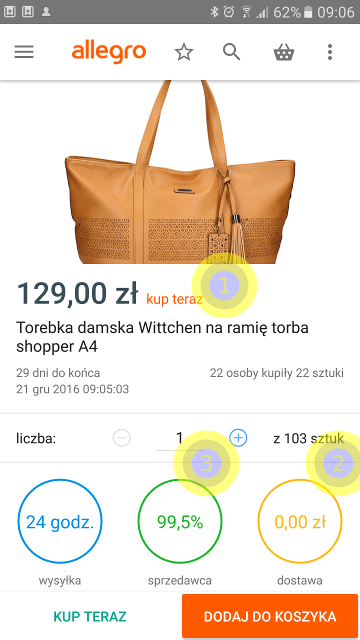 Above you can see Allegro application for Android presenting the offer “Woman handbag Wittchen shopper”, with a minimal delivery cost of “0.00 zł” and seller reliability equal to “99.5%”. Offer details, delivery costs and seller rankings are supported by 3 microservices, so a smartphone had to make 3 requests to show the above view:

Mobile developer had to:

The same procedure applied to all our applications: for Android, iOS and Windows Phone, so the amount of needed work was multiplied by 3.

In the microservice architecture the mobile app had to send many requests to display one view. It made our application less reliable. That’s because phones often use poor internet connections and each additional request increases the probability of failure.

To avoid these problems, we introduced a Service Façade also known as a Backend For Frontend (BFF): 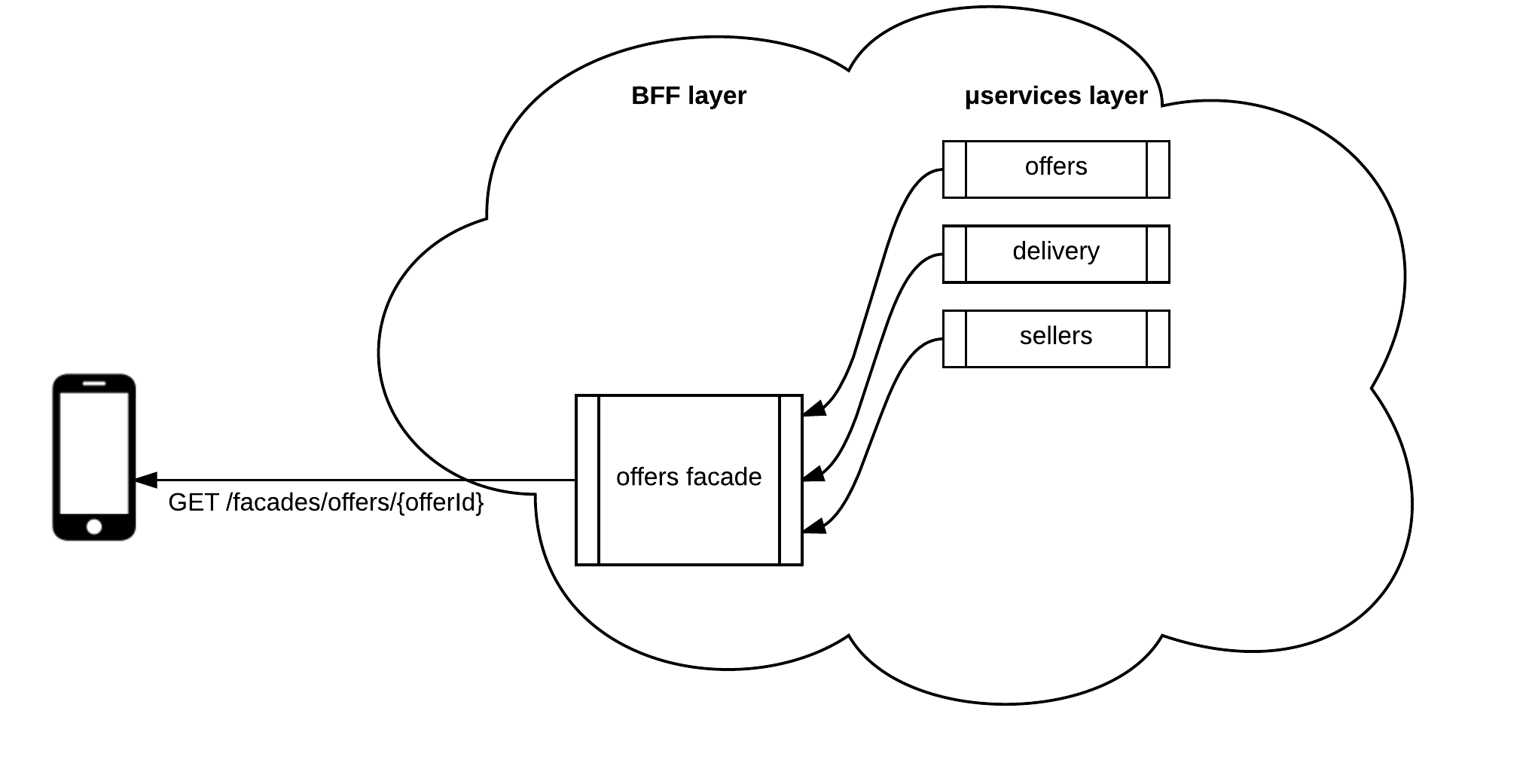 Now, the BFF service sends one response with all data needed by the mobile app. Of course BFF is tightly coupled with client requirements, so it can be developed when the UX team delivers view mockups.

Owing to BFF, mobile developers integrate new features more quickly, views in mobile apps are refreshed faster (there are still 3 requests, but these are all internal requests within the datacenter) and applications are more stable. Additionally we use fewer mobile data packets and save phone battery.

Lack of documentation about nullable fields 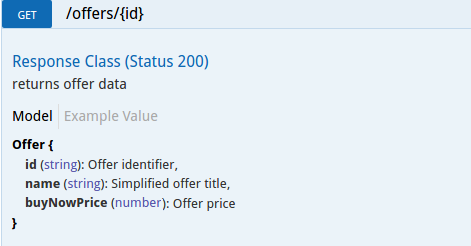 Mobile developers had to predict for which fields null value handler need to be implemented. They made the predictions based on their knowledge of Allegro operations. However, it was hard to find all border cases in such a big system, so the predictions were not accurate. Users noticed it, when our application crashed from time to time.

So, we made it clear in the API documentation in which fields the null values should be expected. We also added a short description for the cases that returned null. 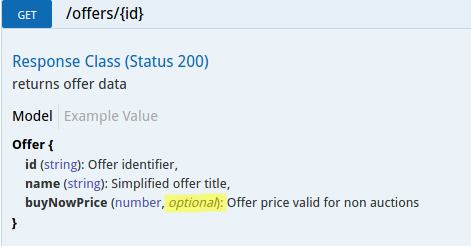 The optional property appears when you omit the field name in API specification / required: 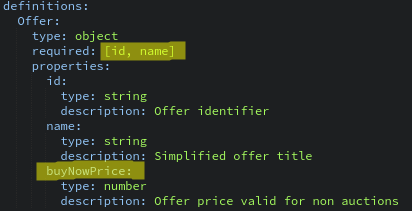 The optional property in the documentation allows mobile developers to not have to predict where to expect nulls. Our testers can precisely recognize corner cases and test them.

Each microservice at Allegro is developed by an independent team. After a few weeks following the introduction of the new architecture, we realized that each service had its own way to report errors. Let’s look at an example: 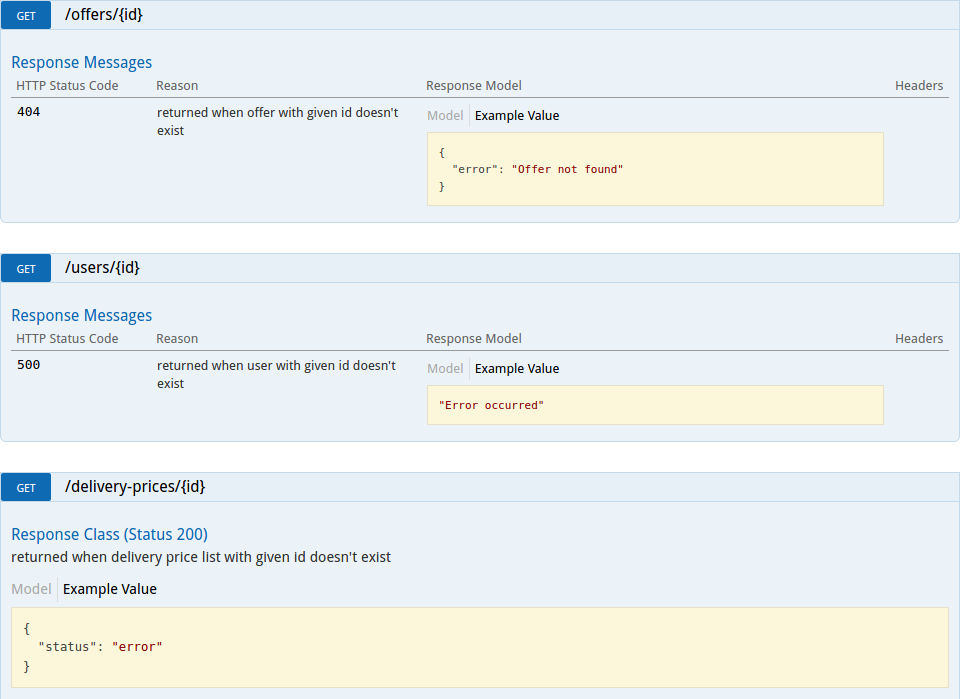 The same “Resource not found” error was signaled by each service with a different HTTP status and JSON structure. As a result, mobile developers had to implement different error handling for every service.

Most applications communicate errors just by showing an appropriate message. In the above case, the message had to be figured out by the mobile developer. Good practice is to deliver a user message from the service.

To make this good practice clear and alive, we introduced REST API Guideline, where we descibed how errors should be reported.

In Allegro following JSON structure has to be returned in case of every error:

Consistent errors reporting allowed mobile developers to implement one generic error handling procedure, which just shows a userMesage delivered by the service. This is sufficient for 99% of errors. 1% of errors require special handling like redirecting the user to application preferences or refreshing the OAuth2 token.

In this article I presented 3 changes we have introduced into our REST API architecture, in order to speed up the delivery of new features into mobile applications. These changes need some extra work on the backend side, but it’s usually cheaper to do it in backend than in apps on 3 mobile platforms.

If you are curious about other good practices of designing REST API, study the full version of our REST API Guildeline.