Some books on IT topics become outdated right after they are published while others stand the test of time. One of the latter is The Pragmatic Programmer. From Journeyman to Master by Andrew Hunt and David Thomas. 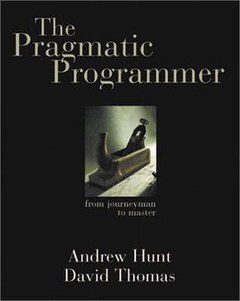 This book will help you become a better programmer, claim the authors, and they are true to their word. What they wrote is not about any specific language or framework but rather about being a programmer in general. The few examples of actual code are in C++, but don’t be put off even if you’re not familiar with this language — they are simple and just illustrate the ideas described in text.

Most of the advice you find in the book is very common-sense and may even sound obvious to more experienced developers. However, I have interviewed dozens of people for software development jobs and it never ceases to surprise me how many of them, even those running for senior positions, do not fit the characteristics of a pragmatic programmer. So, if you are only beginning your journey as a programmer, this book is a must-read. If you already feel more experienced, it is still a very good read that can remind you of some things you may already intuitively know but not be fully aware of and to highlight some aspects of your work you might be underappreciating.

In the context of this book, pragmatic means being focused on a practical approach to solving real-life problems and choosing the right tool for the job. Below are some traits of a pragmatic programmer which the authors list in the preface. People change much slower than technology, so these properties are just as important today as they were in 1999 when the book was published. I would argue that due to today’s technology landscape being much more complex than 15 years ago, they are even more important today than they were back then:

Incidentally, these are also traits we look for when hiring people to work with us at Allegro.

Some tips in the book pertain to individual programmers while others are aimed at development teams. Even though published before the Agile Manifesto, this book contains most of the common-sense tips for good teamwork later found in Agile methodologies. The Pragmatic Programmer was also one of the works that sparked the idea of Software Craftsmanship. Some advice is presented as short tips, among them gems such as: Don’t Assume It—Prove It, Abstractions Live Longer than Details, Don’t Live with Broken Windows or Refactor Early, Refactor Often. Full list of tips extracted from the book is available online.

One example of what being a pragmatic programmer means in practice came to me recently when my team was starting work on a new project. As you may know, at Allegro we are very much into microservices and scalable architecture, which, among other things, means that we almost exclusively use NoSQL databases such as Cassandra and MongoDB. However, we had to perform some operations which could very easily be accomplished with transactions which are not readily available in most NoSQL solutions. After discussing this problem, we were able to estimate that this particular application, which was a tool for use only within the company, would not need to store a lot of data or handle huge numbers of requests. Thus, scalability played much less role than in other systems we build and finally we settled on using MySQL, a relational database, which we would normally not even consider an option. This gave us easy access to transactions. An extra benefit was that MySQL is maintained for our developers as a service, so setting up a new database is very simple and the DB is managed and backed up by a dedicated support team. If we had to set up and support the DB by ourselves, we might have made another choice — ease of maintenance is an important factor when making pragmatic decisions.

By taking a pragmatic approach and concentrating on the actual problem at hand instead of blindly following slogans such as “at this shop, we build highly scalable systems”, we were able to find a better solution and save a lot of effort.

I encourage you to read The Pragmatic Programmer and hope you find it as insightful as I have.

Michał is interested in all things high-performance, whether it be low-level stuff like analyzing how OS caches affect I/O operations or high-level like proper application design and functional programming. At Allegro, he works in a team which develops a Pay-per-Click (PPC) advertising system.