In the era of NoSQL, SQL language is becoming extremely popular in Hadoop Ecosystem. Several query engines are being developed to make SQL queries work better and faster in an environment that totally differs from traditional relational databases.

There are plenty of emerging SQL engines that play well within Hadoop Ecosystem. Most of them claim to be the fastest on the market and suitable to any client’s needs. Although there are some 3rd party benchmarks like Amplab, it remains unclear whether its results are “portable” and turn out to be the same in our ecosystem and with our queries. At Allegro we love working with newest technologies and do not hesitate to try promising ones on the production environments. In this case we had to decide which SQL-like query engine to choose for our Hadoop cluster.

Benchmarks and documentation available online were not sufficient for us. In order to make a proper choice we decided to run Fast Data Hackathon to evaluate which technology meets our expectations best.

Our evaluation included the following technologies:

We also wanted to evaluate Hive on Spark but (at the time of writing) issue HIVE-7292 is still unresolved. We were unfortunately unable to set Hive on Spark up correctly in our ecosystem. In the following subsections we present some basic information about the tools we experimented with. These are based on both: the documentation/information available on the web and the experience we gained during the hackathon.

As our Hadoop cluster is secured, first we checked if the tools support Kerberos. Then we examined if they can be deployed on existing Yarn installations. This allows to build a solution on top of existing infrastructure without additional resources. Due to data locality this also has an impact on performance, but this will be evaluated in Benchmark section.

Another important criteria is query fault tolerance — we run plenty of long running queries on our existing cluster and want to know what happens if something goes wrong during query execution. All the evaluated engines handle failures on their own. Some are able to recompute only parts that got broken, some need to recompute the whole query from scratch.

Hundreds of our employees run SQL queries on our Hadoop cluster. So our new technology users are really diverse. They have different roles in the organisation, different technical backgrounds and prefer different tools. Thus, it is important for us to know how queries can be submitted in each technology. In case of Presto and Impala, JDBC support has been only checked in the documentation. This happened due to hackathon time box. Not everything can be verified empirically in 48 hours ;-)

Capabilities of the query language are an important aspect determining usefulness of the given tool. We wanted to check whether it was possible not only to query the data, but also to utilise views, create tables from query results, insert data into existing tables or use custom user functions. We treated Hive Query Language, which is an industry standard in Hadoop Ecosystem, as a baseline to which other technologies were compared.

To battle-test each tool we prepared a set of 11 queries. In this set there were two types of queries: AmpLab-like queries and Allegro-analytical queries. The first group contained four queries roughly equivalent to the ones used in Amplab benchmark. They differed in the tables used (as we utilised our own data through the entire hackathon) and in the 4th query we called JSON functions instead of a custom UDF. Apart from that the query structures remained unchanged. The second group (Allegro-analytical) contained a representative sample of queries typically run by our DWH (data warehouse) team on commercial data warehouses. These queries were significantly more complex than the AmpLab ones. A brief description of the queries is given below:

Implementing our test queries in each technology turned out to be a really valuable experience as it allowed us to get a feel for working with these tools. Presto implements its own dialect, which we found comfortable and we were able to solve all our problems within its syntax. In Impala we found some difficulties in parsing JSON files as it lacks get_json_object function or anything similar. Drill claims to be compatible with ANSI SQL, but in our test cases it lacked several functionalities. Spark SQL syntax is really close to HiveQL. Although we found problems with INSERT OVERWRITE TABLE and row_number functionality.

The last row of the below table determines how many of Allegro-analytics use cases we were able to execute after modifications to fit engine syntax.

Avro and Parquet are currently some of the best formats for storing big data volumes thus support for them in new tools is really important for us. Unfortunately at the moment we also have plenty of data stored in legacy formats from which we are gradually migrating. In this situation we also require support for CSV and JSON files.

In Drill we had some difficulties with Parquet info retrieved from Hive Metastore. In case of Impala, it does not support all SerDes. Json and CSV files can be only handled as text files. Impala supports Avro and Parquet but we could not write data in such formats. It also lacks support for nested and composite data types (such as sets and maps) which are important for Allegro users to query existing datasets.

Another important aspect was dynamics of the Open Source Community that maintains and develops the products as all evaluated projects are open-source ones. To gain some insight into that matter we checked GitHub stats, such as: numbers of commits, branches, releases and contributors

In order to evaluate performance we used a benchmark consisting of 11 queries mentioned in section “Query Language”. We stored data in a columnar format (Parquet), as we consider non-columnar formats as legacy and are not interested in evaluating their performance. We have run the benchmark 7 times on a dataset containing over 200 GB of data uploaded to an isolated test environment with 4 nodes (each with 16 GB of RAM). This has been done to assure that benchmark’s jobs do not interfere with any other job on the cluster.

The diagram below presents mean execution time of each query: 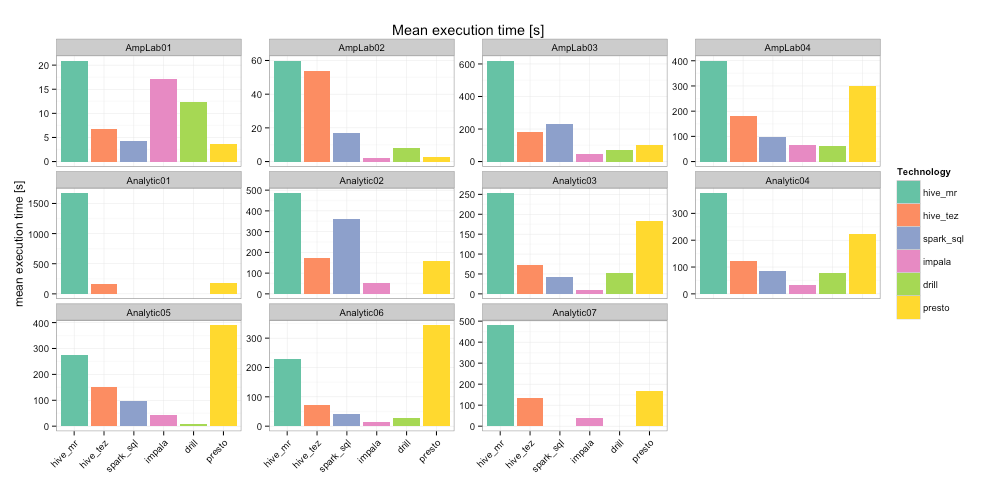 Hive on Map-Reduce, unsurprisingly, is the slowest competitor while the fastest mean times were usually reported for Impala or Drill. When analyzing all the gathered results, presented in the diagram below, it can be noticed that the times seem to be consistent across different runs for different technologies. One possible exception is the first query, which was actually the fastest to execute — the observed execution time variance can be explained by possible minor system load fluctuations occurring throughout the Hadoop cluster. 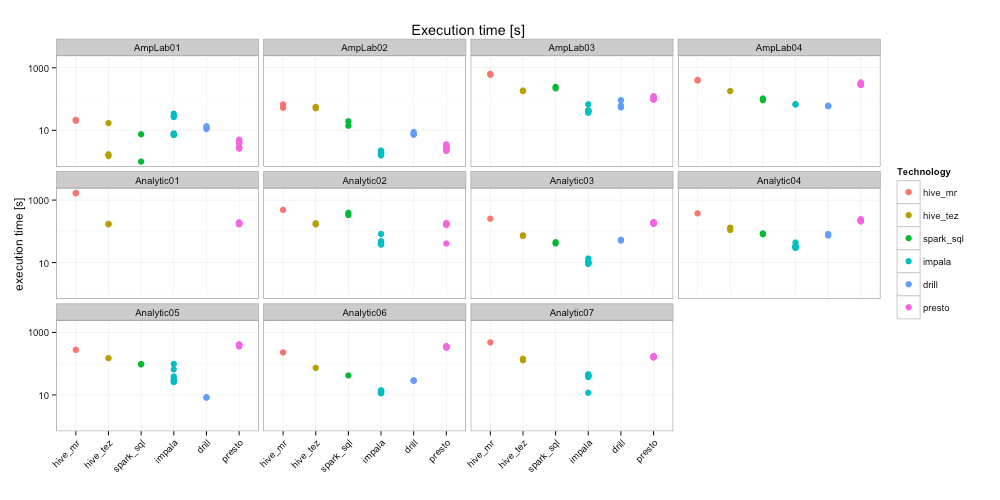 Although we cannot reveal our Allegro queries, we measured how query complexity influences execution time in different engines, which is depicted in the diagram below. 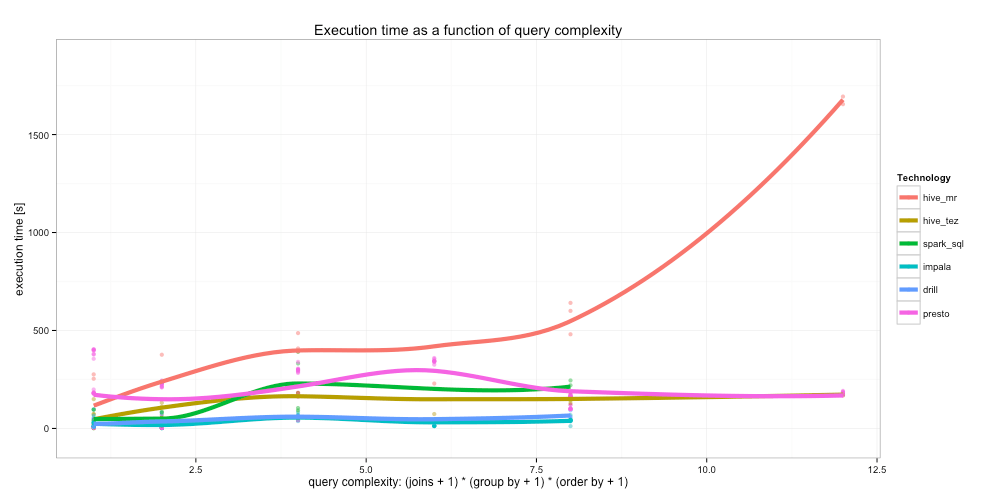 When evaluating benchmark results, Hive MapReduce presented the poorest performance which was not a surprise. The whole hackathon event had been organised to evaluate better solutions and Hive MapReduce was a baseline to find potential improvements. The more complex queries were run, the worse performance could have been observed in that engine. The only exception to that rule were Allegro-analytical queries number 5. and 6. Those performed worse using Presto. Impala turned to be the performance leader in the most queries. At the end we sum up our results obtained for all the engines. Please note that these are our impressions based on our queries and functionality needs.

We already use Hive MapReduce, Hive Tez and SparkSQL on our cluster. None of the evaluated technologies, absent in our Hadoop ecosystem, combined performance and functionalities good enough to drive a change in our ecosystem. Some performed better then what we already have but the performance change is not a significant overall boost. What could be gained is an improvement which requires deep architectural changes like data formats, separate infrastructure or even disabling security. After the hackathon we decided to focus on Hive on Tez and Spark SQL. We believe that with a limited amount of time, we can tune them to run really stable and more efficiently than now.

The evaluated projects grow rapidly and we are sure (and even hope) that our results get out of date soon. We will surely repeat this evaluation in the future.

Paweł is interested in distributed databases stuff with a special focus on making Big Data easy. He is Product Owner in a Big Data Solutions Team at the Infrastructure department. The team develops and maintains a petabyte Hadoop cluster with endpoints like Apache Kafka messaging.

Paweł is a data scientist working at Allegro Group since 2014 with experience in industry and academia. He enjoys working with various types of data technologies and machine learning algorithms.