According to Moore’s law the number of transistors in an integrated circuit doubles approximately every two years. However, the exponential processor transistor growth does not always translate into exponentially greater practical CPU performance. Processor manufacturers for years delivered processors with higher clock rates and instruction parallelism. As a result, single-threaded code executed faster on newer generations of processors. Of course, it is impossible to speed up clock rates infinitely and processors like AMD FX-9590 with turbo clock speed at 5 GHz are rather unique. Today, processor manufacturers favour multi-core processors. It is common to have a quad-core CPU in smartphones, not to mention laptops or even desktop PCs. Consequently, software has to be written in a multi-threaded manner to take full advantage of the hardware. Thread pools can help programmers harness multi-core CPUs.

Good software design techniques suggest that threads should not be created and destroyed manually. Thread creation and destruction are expensive processes which consume both CPU and memory, as they require JVM and OS activity. Default Java thread stack size is 1 MB for 64-bit JVMs. That is why creating a new thread for each request when requests are frequent and lightweight is a waste of resources. Thread pools can handle thread lifecycle automatically according to the strategy selected on thread pool creation. An important feature of a thread pool is that it allows applications to degrade gracefully. A server application can queue incoming requests and handle them when it has enough resources, like memory or CPU, to do so. Otherwise, without thread pools, the server application may crash. There are many reasons why there are no more resources. For example, multiple connections to the server caused by a denial-of-service attack may result in many threads running in parallel which in turn leads to thread starvation. Moreover, programmers who run threads manually must remember to handle exceptional situations when a thread dies due to an exception.

Even though you may not explicitly use thread pools in your application, they are heavily used in web servers like Tomcat or Undertow. It is good to know how thread pools work and how you can tune them in order to optimize performance.

Thread pools can be easily created using Executors factory. All implementations of the ExecutorService interface provided in JDK:

are Java implementations of the thread pool abstraction. The following code snippet presents the lifecycle of an ExecutorService:

We begin with creating the simplest ExecutorService — a single-threaded executor. It uses one thread to handle all incoming tasks. Of course, you can customize your ExecutorService in a wide variety of ways or use one of the factory methods from the Executors class:

In the example presented above we invoke all tasks at once, but you can use other methods to execute a task:

Finally, we gently ask the executorService to shutdown. Shutdown() is a non-blocking method. Calling it makes an ExecutorService enter a “shutdown mode” in which all previously submitted tasks are executed, but no new tasks are accepted. If you want to wait for submitted tasks to finish, you should use the awaitTermination() method.

ExecutorService is a very useful tool that allows us to execute all tasks in a convenient way. What are the benefits? We don’t have to create any worker thread manually. A worker thread is a thread which is used internally by the ExecutorService. It is worth remembering that the Executor service manages the thread lifecycle for us. It can increase the number of worker threads when the load increases. On the other hand it can tear down threads which are inactive for a given period of time. We shouldn’t think about any thread at all when we work with a thread pool. We should instead think about tasks that are processed asynchronously. Moreover, we don’t have to recreate a thread when an unexpected exception occurs and we don’t have to worry about reusing a thread when it finishes a task it was assigned. Finally, after submitting a task we are provided with a useful future result abstraction — a Future. Of course, since Java 8 we can use even better CompletableFuture, but converting a Future into a CompletableFuture is out of the scope of this post. Please remember that working with Futures makes sense only when we submit a Callable, because Callables produce results while Runnables don’t. 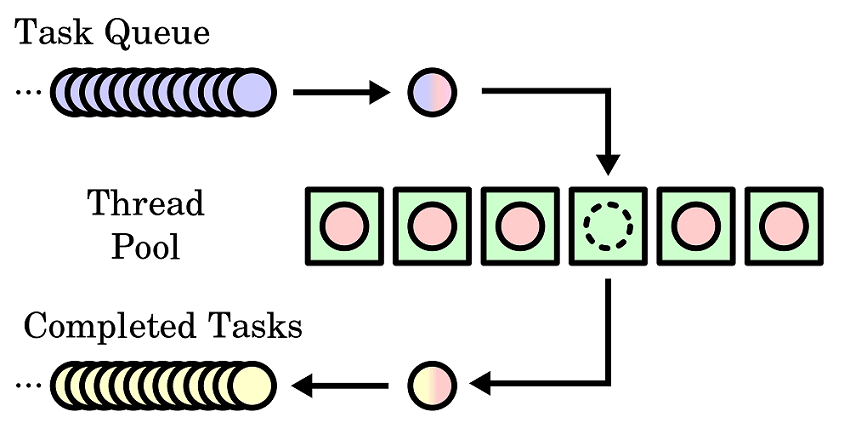 (An image from Wikipedia)

LinkedBlockingQueue is used by default when you create a ThreadPoolExecutor by calling one of the methods from the Executors class. PriorityBlockingQueue is in fact an instance of a BlockingQueue, but processing tasks with respect to their priority is a tricky business. To begin with, submitted Runnable or Callable tasks are wrapped in a RunnableFuture which is then added to the queue. As a result, the ProrityBlockingQueue compares wrong objects in order to determine their priority (RunnableFuture wrappers instead of their payloads). Moreover, when the corePoolSize property is greater than 1 and the worker threads are not busy, ThreadPoolExecutor may serve requests in their insertion order, before the PriorityBlockingQueue can shuffle them with respect to their priority.

By default, the workQueue used by ThreadPoolExecutor is unbounded. It is OK in most cases but, of course, you can change this behaviour. However, remember that unbounded work queue may cause your application to fail due to out of memory error. When you limit the size of the task queue remember to set RejectionExecutionHandler. You can provide your custom implementation or choose from 4 handler flavours (AbortPolicy is used by default):

Thread Factories are often used to customize the creation of worker threads. You can, for example, add a custom Thread.UncaughtExceptionHandler or set thread name. In the following example we log uncaught exceptions together with thread name and thread sequential number:

The producer-consumer problem is a common multi-process synchronization problem. In this example we solve this problem using an ExecutorService. However, this is not a textbook example of how this problem should be solved. My goal is to show that a thread pool can handle all of the synchronization issues and, as a result, programmers can instead focus on implementing the business logic.

To begin with, we start with a Spring configuration:

Then, there is the Consumer class together with the ConsumerFactory component. The factory is used by the producer in order to create a piece of work that will be picked up by the worker thread at some point in the future.

Finally, there is the Producer class that fetches new data from the database and creates business tasks. In this example we assume that the fetchData() method is periodically called by a scheduler.

Thanks to the ExecutorService we could focus on implementing the business logic and we don’t have to worry about synchronization issues. The code presented above uses only one producer and one consumer. However, it could be easily adapted to multi-producer and multi-consumer environment.

JDK 5 arrived in 2004 and provided many useful concurrent goodies, with the ExecutorService class among them. The thread pool abstraction is commonly used in server environments under the hood (see Tomcat and Undertow). Of course, thread pools are not limited to server environments only. They are useful in solving any sort of embarrassingly parallel problems. Due to the fact that today it is more common to run software on a multi-core machine rather than on a single-core machine, thread pools are definitely worth considering.

Piotr is a software engineer interested in both concurrent and functional programming. He is a big fan of high-quality code and clean architecure. At Allegro, he works in a team which develops solutions for the financial department.