We are proud to announce that today we released as open source Varnish as a Service (aka VaaS), a Varnish Cache management tool. VaaS is a web application with a GUI and an API that allows you to populate a database with information about microservices and their back-ends. On the basis of this data, VaaS generates a VCL and sends it to Varnish servers in a matter of seconds, using native Varnish API (no agent is required on the managed Varnish servers). If you require a more complex VCL than the default generated by VaaS, you can overwrite sections of the default VCL or create your own template intermingling ordinary VCL with markup. Markup tells VaaS where to generate backends and directors or where to generate hints telling Varnish how to route traffic. You can wrap backend hints with complex rules to suit your needs.

The tool has been continually developed and successfuly used for over a year at Allegro to manage multiple farms of Varnish Cache servers. We got to the point where it’s mature and flexible enough to share with the community as we believe there may be people out there who could benefit from using it. The key features that set VaaS apart from other tools are:

The graphic below shows how a change entered via VaaS GUI or API gets distributed to Varnish servers. The VCL is sent and then applied on all servers simultaneously. The whole process should not take more than 10 secons. Multiple Varnish clusters are supported. 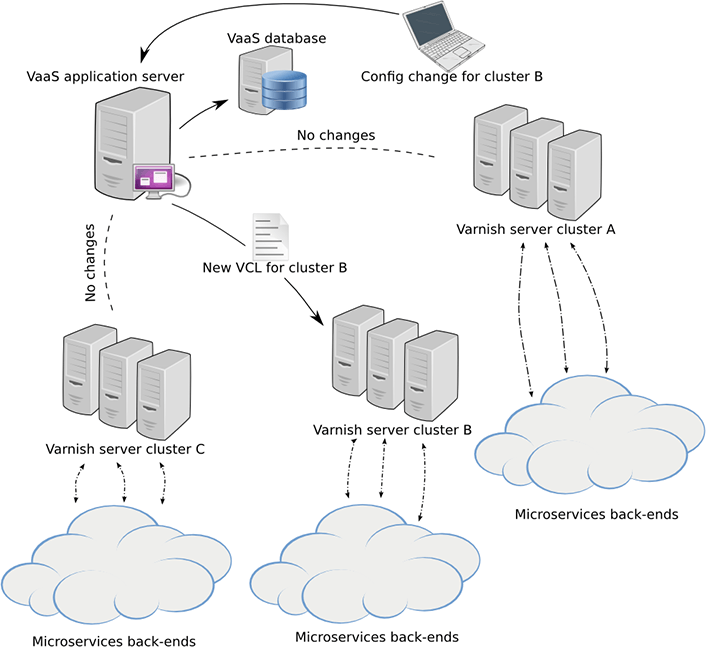 What are the benefits of using VaaS

Since we started using VaaS on a broader scale in Spring 2014, the most repetitive, time consuming, error prone and boring tasks related to VCL maintenance became history. If a member of a team responsible for a microservice needs to add, remove or modify a back-end, they can do it themselves using VaaS GUI, or automate the task using VaaS API. This is especially useful in an SOA environment. Allegro consists of very many microservices. Each microservice utilizes physical servers, cloud servers or Docker containers. The servers are grouped into directors (a collection of back-ends). It would be a very difficult task to maintain a varnish VCL consisting of so many back-ends that come and go so often (which is especially true for the cloud and Docker back-ends). This is why every team responsible for a microservice maintains their own director by themselves. This wouldn’t be possible without VaaS. What is worth noting, the VCL template is maintained by a narrow group of Varnish specialists. That way we can be sure that the template is well tested and does what it’s intended to do before being launched into production environment. Even though the VCLs are edited frequently by many people, human errors affecting the entire Varnish cluster are highly unlikely if not impossible.

Where you can get it

What versions of Varnish are supported

VaaS allows you to choose between Varnish 3 and Varnish 4 VCL templates.

How to use it

VaaS documentation is available in Read The Docs. There, you can find instructions on how to set VaaS up and how to use it. Since setting up VaaS can be quite a demanding task (you need at least one Varnish server, at least one sample back-end, a database server and a VaaS application server), we have created a test environment that you can use to easily familiarize yourself with VaaS. We call it VaaS in Vagrant.

We count on your input

We believe VaaS is mature enough to safely use it in production. However, the more people use VaaS, the greater chance that bugs will be discovered. Therefore we encourage you to participate in VaaS development on Git Hub. Similarly, if you think VaaS would benefit from a feature that we haven’t yet implemented, feel free to create a pull request. We will be more than happy to review and possibly include it in future VaaS releases.

Szymon is a clarinet player by education and a systems engineer by profession. At Allegro Group since 2013.